This week I had the chance to work with a third grade teacher, Andrea! Her class is just about to begin their unit on multiplication and division so she wanted to do Talking Points to see what they knew, and were thinking about, in relation to these operations. During our planning we discussed the ways in which this Investigations unit engages students in these ideas, misconceptions students typically have, bounced around ideas, and played with the wording of the points. Being my first talking points activity with third graders, I was so excited to see how students engaged in the activity. I have found that even during Number Talks, the younger students are very eager to share their own ideas, but listening to others is difficult.

In looking for how students “saw” multiplication and thought about operation relationships, we designed these Talking Points..

Andrea introduced the activity and we did the first talking point as a practice round in which we stopped the groups after each of the rounds to point out the important aspects. We pointed out things like,”I liked how Bobby was unsure and explained why,” and “I liked how everyone was listening to Becky when she was talking,” and “I thought it was great proof when Lily drew something really quick to support her thoughts.” Then we let them go and walked around to listen as well!

During the Talking Point round, some things we found really interesting were:

We had pulled two of the points that we wanted to discuss, whole group, afterwards, “I can show multiplication as a picture.” and “We can use multiplication problems to solve division problems.” We put them up and just asked them what their table had talking about. The conversation was amazing. Hearing how they thought about multiplication as groups of but 50 x 2 means “fifty two times” while 2 x 50 means “2 fifty times.” We also heard how someone at their table had changed the way they thought about something. And the division conversation was so great and for the students who were unsure because they did not know what division meant, it felt really organic to come out that way… from them, not us.

Of course, we followed with a journal write:) We gave them three choices to write about…

I was so impressed by the way they wrote about their thinking, by 5th grade, they will be amazing!!

The student above, during the Talking Points, said that he could show multiplication as a picture because “an equation IS a picture.” It was lovely to see him make the connection to a visual for an equation in his journal.

I wish the quality of this picture was so much better but her pencil was so light it was hard to see! She does a beautiful writing about how exactly someone at her table changed her mind with such an articulate way of talking about multiplication and division! 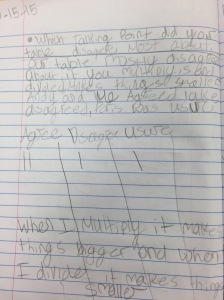 This student above explains perfectly why teaching is so difficult…”…sometimes we have facts about math, we all have a different schema. We were taught differently than other kids.” I am curious to hear more about her feeling about the end piece, “some kids know more then other kids.” Is that ok with her and she understands we all will get there just at different times? 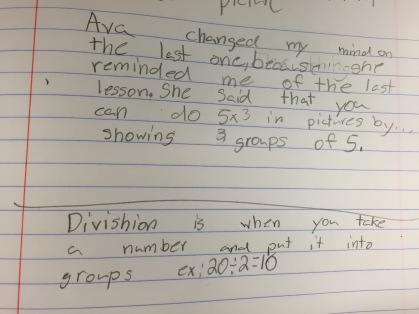 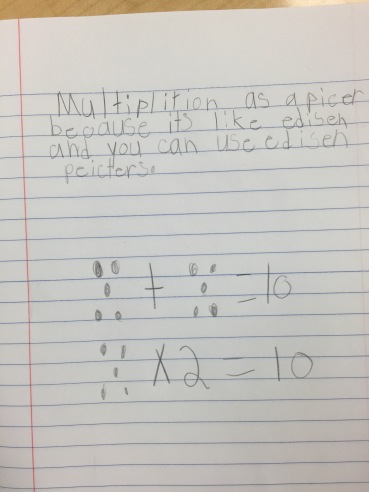 These last two were two different ways in which students reflected on the dot images they have been doing in relation to multiplication!

What a great class period! I cannot wait to be back in this class to see how students are working with and talking about multiplication and division!

We started our 2D Geometry unit with Talking Points: https://mathmindsblog.wordpress.com/2014/11/13/talking-points-2d-geometry/.  This was the ultimate pre-assessment in which I could hear what the students were thinking around mathematical concepts while at the same time, they had a chance to also hear the thinking of their peers. After the talking points activity, I had the students reflect on a point they were still unsure in their thinking.

We are now wrapping up our Polygon unit, and I thought it would be interesting for them to reflect back on what they were unsure about in the beginning, and get their thoughts now. I have a class full of amazing writings, but here are just two of the great reflections (the top notebook in each picture is the pre-unit and the bottom is post-unit)….

Looking at the class as a whole, it was so interesting to see their math language develop and see them laughing at things they had written before. I loved that the student above wrote, “I am smarter!!!” How amazing they can see their own learning!  During their reflection time, it was so fun to also hear students exclaiming, “See, I KNEW I was right!”

This is the first pre/post assessment I have ever done where I think the students enjoyed it as much as I did! They were as proud of themselves as I was of them!

MathMinds Blog by Kristin Gray is licensed under a Creative Commons Attribution-NonCommercial-ShareAlike 4.0 International License.
Based on a work at https://mathmindsblog.wordpress.com/.
Loading Comments...