It happens every year, in what seems like every grade level…students continually call a rhombus a diamond. Last year, when we heard 3rd graders saying just this, Christopher helped the 3rd grade teachers and me put the students’ thinking to the test with a Which One Doesn’t Belong he created.

This year, at the beginning of the geometry unit, we heard the diamond-naming again along with some conversation about a rectangle having to have 2 long sides and 2 short sides. What better way to draw out these ideas for students to talk more about them than another Which One Doesn’t Belong? We changed the kite to a rectangle this time, hoping we could hear how they talked about it’s properties a bit more.

Overwhelmingly, the class agreed D did not belong because it had “5 sides and 5 corners” and eventually got around to calling it a diamond, which in their words was “not a real shape.”

While we knew a lot of things could arise, our purpose was diamond versus rhombus conversation, so of course the students had other plans and went straight to the square versus rhombus.We wouldn’t expect anything different!:) For every statement someone had about why the square or rhombus did not belong, there was a counter-statement (hence the question marks in the thought bubbles).

Jenn, the teacher, and I were really surprised at how much orientation of A and B mattered to the name they gave the square and rhombus but did not matter for the rectangle. That was just a rectangle, although one student did wonder if a square was also a rectangle (he heard that from his older sister). The students had so many interesting thoughts that we actually had to start a page with things they were wondering to revisit later! That distributive property one blew me away a bit!:) 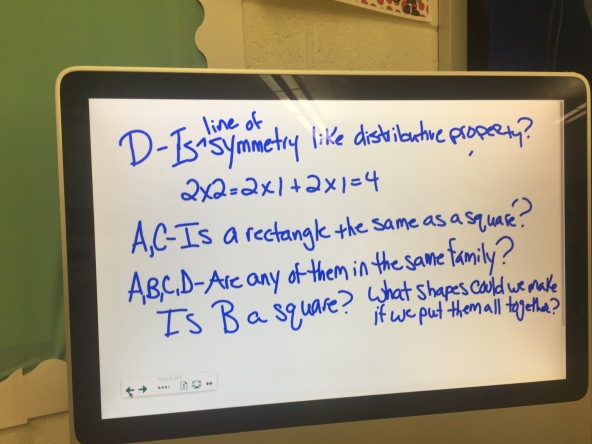 We then sent them back to journal because we wanted to hear how they were categorizing a square and rhombus. It ended up being really interesting just seeing them try to explain why they were different and change their mind because they just started turning their journals around!

Some stuck with them being different..

Some thought they were different, but one could become the other…

Some were wavering but the square was obviously the “right way.”

Some argued they were the same… 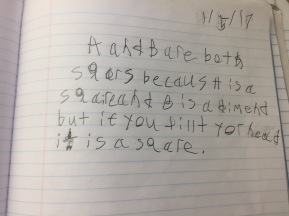 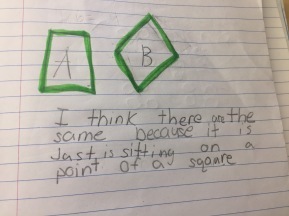 However, before I left school today, I went back to the 3rd grade standards to read them more closely: 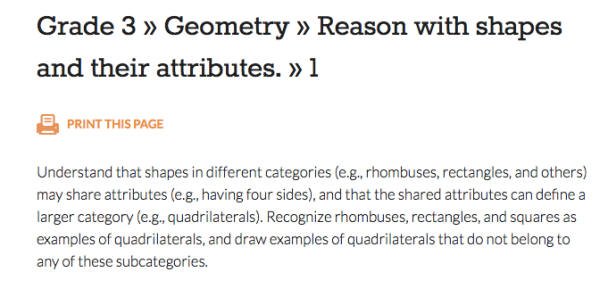 and read the Geometry Learning Progressions, only to find this in 1st grade:

Would love to hear any thoughts and ideas in the comments!