This week, I planned and taught with Kala in her her 1st Grade classroom! It was the students first day of subtraction in the official “take away context type of work”sense, so it was really exciting to see what they would do with it. During our planning, Kala discussed ways in which she anticipated students would solve the problems and we thought about the framework below that is also presented in the Investigation’s Teacher Notes for that unit.

Since it was their first day with subtraction, we wanted to be sure to capture their strategies as clearly as possible to help in planning future lessons. To do this, we designed a quick table with the following headings that we planned on jotting notes about the students’ work on as the lesson progressed.

The lesson was supposed to open with giving students the following problem:

Max had 9 toy cars. His friend Rosa came over to play with him. Max gave 3 of the cars to Rosa to play with. How many cars did Max have then?

We decided to make this a Notice/Wonder to really allow students to think about what is happening in the context, over focusing on the numbers. So, instead, Kala posed this (we changed the names from above on accident):

David had some toy cars. One day his friend Max came over to play with him and David gave Max some of his cars.

Right away, they began to exclaim, “That was a short story!” As they shared, Kala recorded their noticings and wonderings. The very first notice was about not knowing how many David gave to Max because it said “some.” On the very last notice, the words subtract and minus came out. She couldn’t quite pronounce subtraction so she went with “minus” for her notice. She said David was a minus because he gave some, but Max was a plus because he got some. I loved that way of thinking and had not expected that at all! We then said we were going to answer some of their wonders….David had 9 and he gave Max 3. Then, like a Number Talk, they gave a thumbs up when they had an answer and we shared as a class. Kala and I just continually asked, how did you decide on the 9? Why did you do that with the 3? Where was that in the story? We decided not to write these strategies down because we didn’t want to influence their work during Roll and Record. We wanted to see where they were in their own thinking. 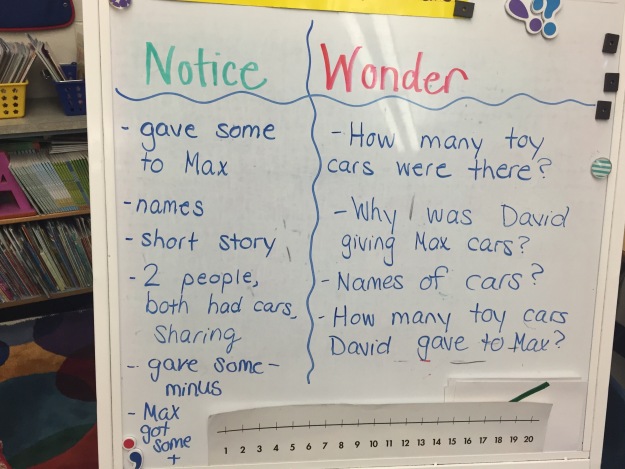 I then put up the game board for Roll and Record and we talked about how this was the same and different than the Roll and Record they have been playing with addition. They did notice that this board started at 1 instead of 2 and ended at 11 instead of 12. This will be something I would love to have them thinking about more in later lessons…why is this board this way? We played a few practice rounds of rolling a number cube, taking away the number we rolled on the second die, sharing how we subtracted the two numbers and recording it on our sheet.

They then went back to their seats and played with a partner. They had cubes, number lines, and 100 boards available if they chose to use them. These are a few pics I could snap before the game boards were erased.

As they played, Kala and I both walked around with our sheets and recorded the strategies we saw happening around the room. I was really amazed at the thinking in so many ways! I could tell they were comfortable using a variety of tools and by the way they could explain their thinking, it was obvious they were very used to doing that as well. This was my completed sheet at the end of the period. There were a couple of students I missed and a couple were absent, but between Kala and I, we had a really great picture of where the students were in their thinking. I was really surprised I only saw a few directly modeling the subtraction. The arrows were from me just starting to write their thinking and forgetting to put it in the appropriate column!

After they finished playing, we decided to give them the original problem context with two different numbers (8 and 5) to see if they could create a written response of how they solved the problem as well as they were able to verbally explain to us. We did this because Kala had mentioned during our planning that she often sees them resort to drawing and crossing out when asked to show their work even when she knows the student has a different strategy in mind. I completely felt that same thing in 5th grade as well!

They did not disappoint in their journals! I am wondering if, in us walking around and asking them to verbalize their thinking, it helped them have a clearer picture of what they did? Just a hunch. We also asked them to “show your thinking” instead of “show your work” because we think that has something to do with the direct modeling at times too.

Here was the direct model…

We had some interesting counting backs. Some counted back dots, like the die. When doing this some put numbers next to the dots while others just used them as dots to count back on. I was so excited to see a student who had counted back on his fingers write out the process. He even wrote the number he started with and ended at the correct number. <- sometimes I see them count that 8 as part of the counting back process and end at 6. 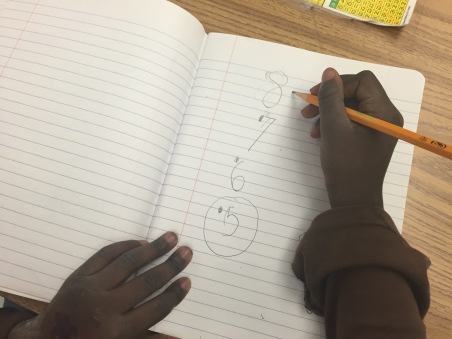 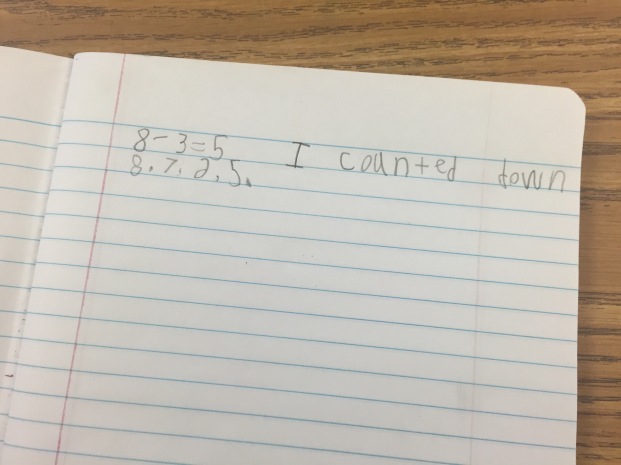 We had a great variety of tools and models, whether used for direct modeling (like the ten frame and tallies) or used for counting back on the number line. The bottom papers were partners so it was interesting to see them do a jump of +3 versus -3. Just as class was wrapping up they were talking about where their answers were because the partner who subtracted 3, said it looked like her partner’s answer was 8 because he added three and landed at 8. Interesting convo to have later too! Their journals also made us realize that we didn’t use the word difference in a way that students knew the answer was called the difference and not sum (yeah, they know sum though:)! Something for us to think more about next time! 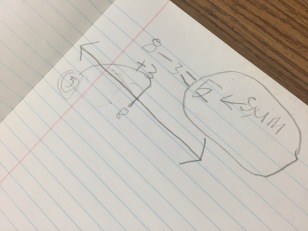 Then we saw some great related facts, like this one. I am assuming the number line above also was thinking this but put it on the number line instead of writing the fact. That is another interesting convo to have in future classes!

This student used a known fact to get the answer and could not have explained it more clearly. I asked her to explain to me what she did and she said, “I knew 8-4=4, if I take one away from the 4 it makes it a 3 and the answer changed to 5.” Wow. Conjectures and claims here we come!

What a great day! From here, the students do “Start With/Get To” cards as their Ten Minute math that will help emerge subtraction as distance as well as reinforce the relationship between addition and subtraction. They will also play Five in a Row which will allow ideas such as 7-5=6-4 emerge when looking at expressions with the same difference. Of course, many context problems follow from here too so it is going to be so fun to watch what they do with this work!