Due to a schedule change today because of an assembly, Malorie and I did not get a chance to sit and plan together before teaching the lesson. Luckily, she is always so prepared and had read my thoughts on the blog I did yesterday about it so we went into the lesson with a common vision and then talked our way through the shortened class period with the students.

We started with choral counting by 3 and then 30. We chose to include 5 multiples in each row in hoping the students would see a pattern in the “friendly numbers” if they struggled to see patterns in other places. After the list was up, they took a few minutes to write  down any patterns they saw in their journals and we shared out. This was the count and then notices Malorie typed as they were sharing:

I could have stayed with these patterns all day long, but we decided to let students revisit these patterns over the course of this unit. There are some really great ones up there like adding the digits and that number is also a multiple of three and if you add any of the numbers up there, the answer will also be a multiple of 3. They made some predictions about numbers that would show up later in the list and talked about connections between the two lists. Multiplying by 10 and the zero “put on the end” was definitely the most popular noticing of the class period, which was a nice lead into our stacking of the boxes of oranges.

We explained the boxes of oranges held 30 oranges and asked them to estimate how many boxes (represented by the post-its) would be needed to stack up to Mya’s shoulder. Malorie and I quickly tried to figure out if we wanted to ask about number of boxes or number of oranges and decided to give them the option of either. It worked out beautifully because the majority of students told us boxes along with how many oranges it would be as well. As Malorie stacked the post-its, the students counted along. Some were counting post its while I heard others counting oranges. We stopped approximately halfway, took adjustments on their estimates and continued. We finished with 480 oranges, 30 boxes. As we were running out of time, we decided to end by asking if there were any equations they could think of to represent the oranges and boxes.

This was unfortunately where we had to leave off because the classes were shortened and then next class was waiting at the door. So we met during her planning later that day to regroup and find our starting point for the next day.

Tomorrow we have decided to lead with a talk about the orange tower we built today. This is where we had a big discussion around what we want to really have students think about….the book seems to really focus on the multiplying by a multiple of 10, like what would be the 20th multiple, the 30th multiple, etc but we want to play around with the properties a bit more here.

So, we decided to ask students what equations or expressions they could use based on the tower to arrive at the 330 post it. We are thinking we may get some things like this:

We want to set them equal to one another and ask how they could prove are the same answer. We are hoping to see the associative and distribute properties come out. We definitely could get some division too and that could make it really interesting!

We decided to go with this because Malorie says that she often sees students “putting one zero” on the end of any number when they multiply by any multiple of 10. For example, when multiplying 40 x 30, they will just get in the habit of putting one zero because they don’t see that 10 x10 happening. This is where being able to think about 40 x 3 x 10 is helpful for students.

Next, they will make their multiple towers based on these numbers we will assign to partners: 15, 16, 32, 28, 24, 48, 18, 36, 35, 70, 45, 14. Since Doubling/halving is coming up, we thought this could bring out some of those ideas. Then we will ask them to come up with expressions for any number they choose in their tower. We had planned for that to be in their journal, but I wonder if that is something they could hang up next to their tower for a notice/wonder walk around the room? Hmmm…have to ask Mal in the morning!

Follow Up…today we did a choral count 6 and then 60 and the pattern-finding was even better then yesterday. It was always amazing to me how students notice new things and then based on how we record. This time Malorie did four multiples in each row so in addition to finding new patterns, they also started comparing it back to what they noticed yesterday during the 3 and 30 count. Even though the 3 and 30 count was not up on the board anymore, they still remembered the patterns and numbers like they were right in front of them because they were so excited about them. So cool to see/hear.

Next, we looked back at the multiple of tower to 30 on the wall. I asked the students if they could find an equation with the answer of 330 (which was on the tower) using numbers on the tower and gave them time to jot some ideas in their journal.

As the students started to share, I realized it was a really Badly Worded Question. As they shared I was getting “ways to get 330” but not relating anything to the tower, which we were hoping would happen. We wanted to see the associative and distributive properties emerge, but were getting addition and subtraction equations.

So, as I got “420-90=330 and 270 + 60=330…” etc, I asked “How would would you show that action on the tower….and then they were on a roll. I didn’t want them to think what they had written was not valued so we asked them to share what they had originally written and we built on from there! There is SO much to work with here so I cannot wait to plan for some exciting algebraic work. 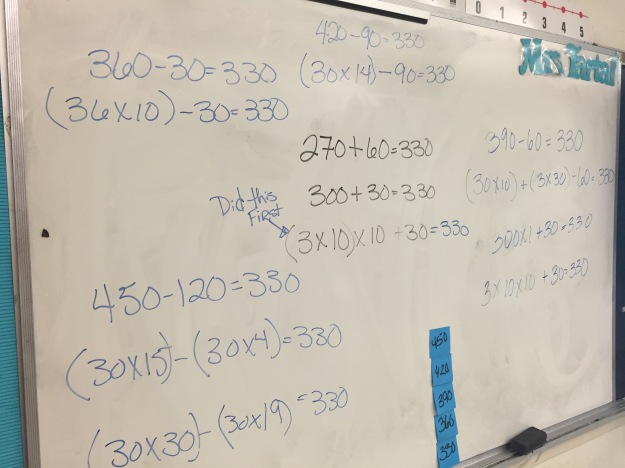 I had to plan with another teacher so I left as the students began working on their multiple towers. After they finished their own towers, we were going to ask them write equations for a number on their tower based on moves on their tower. I have to check back in with Malorie in the morning!