Through numerous Decimal Number Talks, Investigations on tenths, hundredths, and thousandths grids, and many findings about decimal operations, we are approaching our last couple lessons in our decimal unit. Not that the work with decimals ever ends, but our unit ends with decimal times decimal and the generalization of a “rule” for multiplying decimals. I have many thoughts about the new Investigations unit on multiplication of decimals but I am very excited about the connections my students have made between whole number and decimal operations. I do attribute a lot of their flexibility to our Number Talks though:)

I wanted to assess where they were before we moved into a decimal times decimal work because I think there is a lot of reasoning to do there before we come to a generalization!  I was really excited to see the use of multiple strategies!

First, I had students who were still treating the decimal operations like whole number operations and reasoning about where the decimal point “makes sense.” I do love this because it is heavy in estimation and sense making about what is reasonable. It is obviously not the most efficient strategy, but I what I truly learned from this, is that I need to do more whole number multiplication work with this student to build efficiency…

I have students that love partial products….(and I cannot get some students to stop saying the “box method”….:)

I loved this area model because of the size of the .4 side. She was very particular about that! 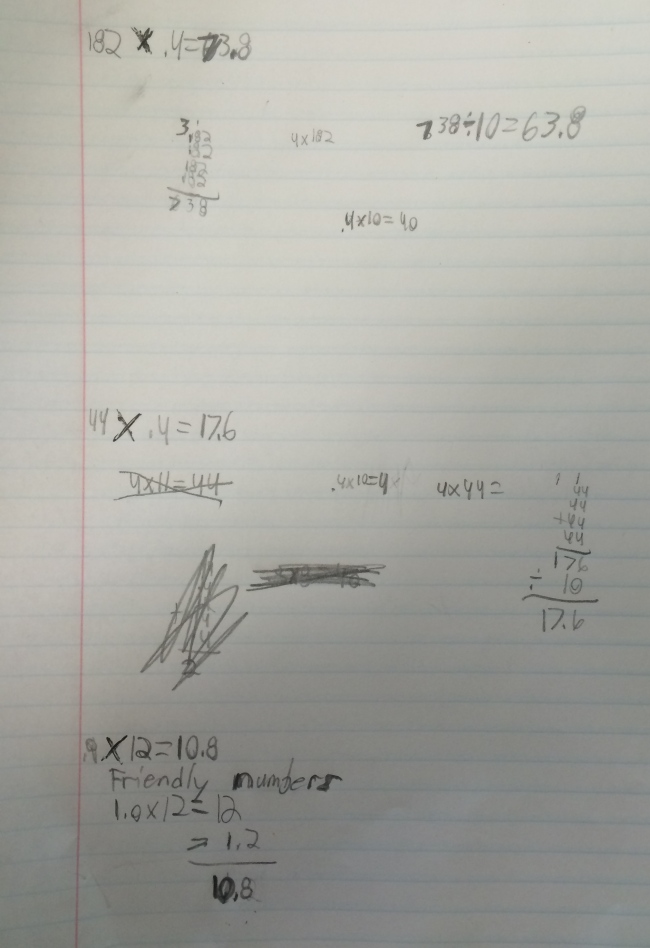 Saw some halving and doubling…

I had a student think about the decimal as a fraction. It starts at the top and then he jumps to the bottom of the page.He said he multiplied 9 x 12 to find out how many “rows” he would have, 108. Then he divided it by ten because there were 10 rows in each grid.  It was interesting!