From my own experience teaching 5th grade and a lot of conversations with teachers in grades 1-4, subtraction always seems to be such an area of concern with students. After the introduction of subtraction as take-away, students tend to live in that land forever. This idea was spinning in my head the entire time I read Zak’s article in NCTM’s Teaching Children Mathematics. The article came at an ideal time as I had just planned and taught a subtraction lesson in two second grade classrooms.

As we were planning, the teachers and I discussed two reasons we think students struggle with relational thinking when dealing with subtraction:

Based on the problems they were doing in their Investigations unit, we wanted to take the same numbers and create two different contexts for subtraction…one as a take-away context and one as a distance context and then have the students think about what made them subtract in one and what made them add in another. (After reading Zak’s article I want to try another structure where we keep the same context, but change the numbers to see if that impacts their solution process.)

First we did a notice/wonder on the following scenario:

Mike is saving money to buy a game. He already has some money saved.

After collecting the things they noticed and wondered (in black ink), I asked them what question they think we could ask and solve based on this story. They gave the question in red ink and then I asked them what information they would need to solve it and I put a red star next that information. I told them the game cost $22 and he had $8 saved and sent the on their way.

Every single student added up, as we anticipated. 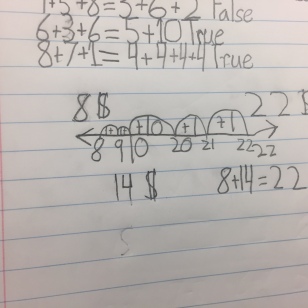 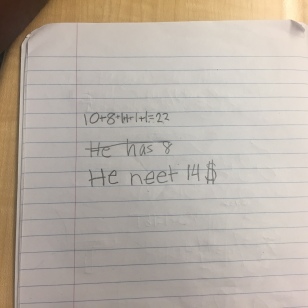 Then we gave the students a second problem to solve: same numbers, different context:

Bobby had 22 toy cars in his book bag. He gave 8 of his toy cars to his friend Becky. How many cars did Bobby have left?

They all took away the 8 except for one student. The variety of strategies was great and we were actually surprised to see a student solve it the same exact way he had used in the previous context. 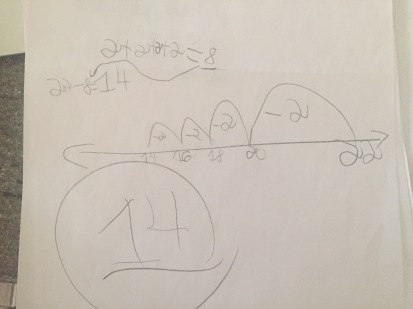 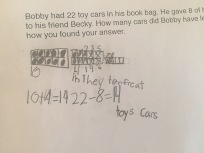 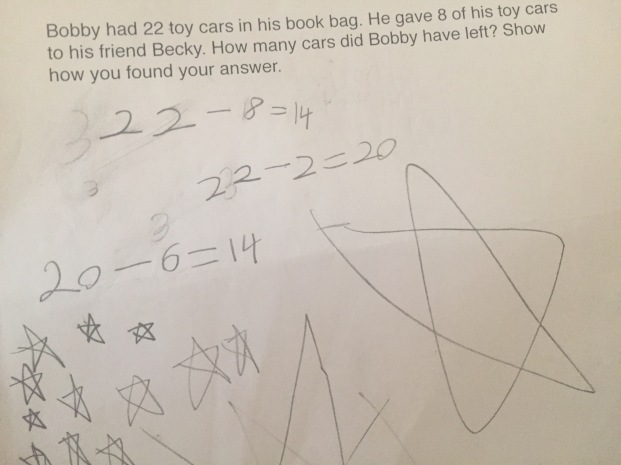 We shared some strategies and asked them to compare the two problems. They noticed they were the same numbers and same answer but one student actually exclaimed, “How can they be the same answer when we added in one and subtracted in the other?!” What a great jumping off point for future lessons!

Time was up for this class period, but I made sure I stopped by to chat with the student who added in both because I was interested in his thinking. He said he knew that he had to subtract in that problem because it was taking away and he knew that you can add up to solve a subtraction problem. So, how does that happen? He has been in our school with all of these other students K-2, so how does he know this? What experience did he have, inside or outside of school, that allowed him to decide this was subtraction, know he can add up, and solve it? and then, Is there ever a context where he WOULD take away or has he learned this as to never have to take anything away?

After this lesson and Zak’s article, I am still reeling with my thoughts on subtraction. There has also been a lot of great conversation on Twitter about sequencing student work and I wonder how a set of student work like this could/would/should play in to students seeing subtraction more relationally? Lots of great stuff to think about!

6 thoughts on “Subtraction in 2nd Grade”