Yesterday, I had the chance to teach a 1st grade math class. The teacher told me they are about to start their fraction lessons so I thought it would be fun to do a quick check in on what they currently think about half and then do a numberless story problem to see if they incorporated anything about half in that work.

I launched with “Tell me everything you know about half.”

One student started by telling me it is like half a piece of pizza, so I asked what that looked like to her and she said it was the whole thing (big circle with hand) and then cut in half (hand straight down vertically). That springboarded into half of lots of things, cookies, strawberries…and many other things. Each time I asked if each half was the same in the different things and they said no, they were different sizes. So, I asked what was the same and someone said they were all cut in the middle. I got some cool sports references, I asked when halftime happened and they said in the middle of the game. Then one girl said “5 is half of 10.” Awesome. I asked how she knew that and she said, “because 5+5=10.” Hands shot up everywhere after that with other numbers and their halves. 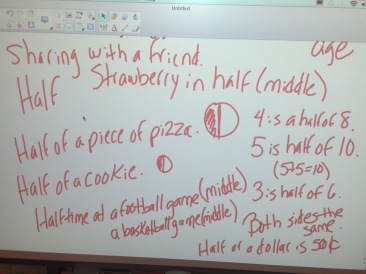 Then I posed the following story on the board and read it to the class:

There was a pile of blocks on the table. Jimmy came into the room and took some of the blocks. He gave the rest of the blocks to his friend Kali.

We did a notice/wonder and they wondered the things I had hoped: How many blocks were there? How many did Jimmy take? How many did Kali get? It was really cool that one student noticed there were none left on the table because Kali got “the rest.” I didn’t expect that one!

I let the partners choose their own numbers and as they got their answers, I asked if they could write an equation for their work. My plan for the group share was to have groups share, some who split the blocks in half, others who did not. My backup plan, because I never know what could happen, was to compare addition and subtraction equations for the same story to see if they noticed a relationship. I ended up with enough half/not-half that I went with that!

Here were some of the groups who split the blocks in half. The number choices were really interesting. I would love to put all of them up there for the class to talk about…why did they choose numbers that end in zero? What do we know about those numbers? 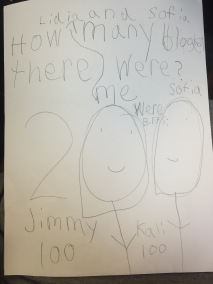 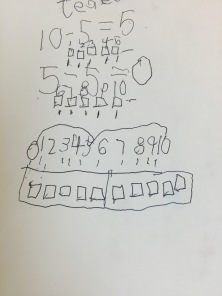 Some did not choose a number they could easily split in half. The group on the right noticed the commutative property right away and drew lines to show the same numbers in their equations.

Some really wanted to write as many equations as they could that didn’t necessarily match what was happening in the story but was great mathematical reasoning in their work! 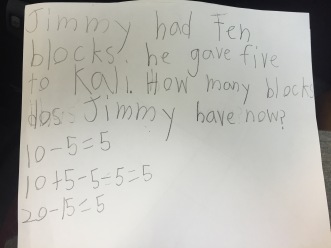 I cannot wait to see what this group does in their fraction unit, so many great thoughts and work about half!

2 thoughts on “1st Graders Talking and Using Half”