There are so many interesting things to consider when counting, however having taught upper elementary and middle school, I have never taken the time to consider these complexities. After doing a Counting Collections activity in Kindergarten on Friday, I saw so many foundational ideas being constructed in simply counting a set of things. As I planned and implemented the activity with Kindergarten teachers Jenn and Michele, I felt a lot of the ideas in this post by Joe Schwartz, including the amazing counting conversations, surfacing.

The lesson plan seemed simple: Give the students a set of things to count. Walk around, watch, listen, and ask questions. From that simple plan, our planning conversation was filled with so many questions since this group of students had never done a counting collections activity. After watching this Teaching Channel video, we began asking ourselves: What is important about the set of things when students count? What tools do we make available? How do we keep them from grabbing every tool because they can? What questions do we ask? What numbers are appropriate for each student? How will they record their thinking? What is the end idea we want students to leave thinking about? This post would be so long if I included our decisions on all of this, but I am happy to answer any questions in the comments if you are curious. Not that they were the right or wrong answers, but our decisions.

We decided to keep the sets the same object, same color to avoid students sorting by color. I think it will be an interesting conversation in the future about what matters when we are counting, but for the first time, we wanted to really see what they did with counting without distractions and how they recorded their count. We made available big cups, small cups, ten frames and plates.

Students had to consider the size of the object and size of the set to decide on the tool they felt would best organize their set. We saw groups switch because their object did not fit in or on what they originally chose. Some groups liked the plates to stack and organize their count because the ten frames took up too much space on the table. I wish I got a picture of one group who used the yellow and blue ten frames in the picture below…they put their full tens on the blue and their ones on the yellow and were able to articulate that statement as their counting strategy. 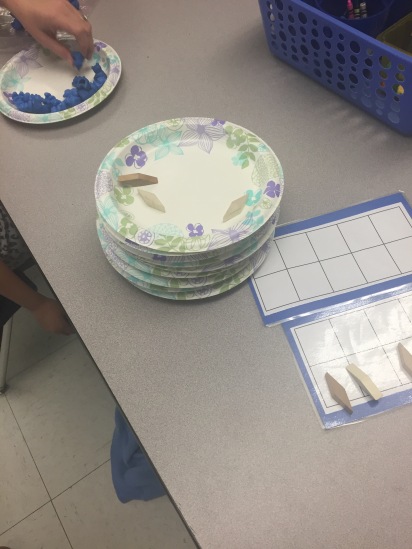 Counted vs Not Counted

This is where the tool they chose came into play again. Some groups chose to put the uncounted objects in one cup and count by 1’s into another cup. For these groups we saw a lot of losing track of count. We anticipated this in our planning and decided to ask them if there was another way they could count to help keep track of their numbers or if there was a way to organize their objects so we could see how they counted when we walked up.

Another group drew a line on their first plate and said it was for ones they counted and ones they hadn’t, however as the crayons took up too much space, they moved to putting 10 on a plate.

Do We Even Have to Count?

This group got away with not really doing any counting at all until they combined their end organization. They filled a ten frame and poured it into cups. It was interesting because in the first, smaller set they counted just before this larger one, they filled all 10 frames on their table (in the pic under Choice of Tool). As it took up too much space this time, they switched.

This group put 10 on each plate and started to label each plate by 10s, however on the second plate one partner wrote “20” because she was counting, 10, 20, 30..etc. Her partner corrected her and said there were not 20 on the plate. You can see the scratched out mark on the plate and hear it here. 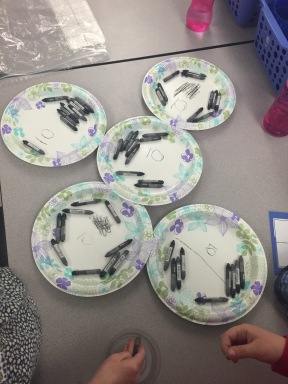 This group kind of blew my mind. Their second set was 225, so they decided to put ten beans in every box of the ten frame. They were then even able to articulate the fact they knew 10 groups of 10 is 100. You can listen to them here. This is my first try with YouTube, so if this doesn’t play, please let me know in the comments;)

This was one of the areas where we were so curious to see what happened! Jenn and Michele do a ton of Number Talks and journal writing, however during the Number Talks, the teachers does the recording. We didn’t know if they would draw everything they counted or be able to record it more abstractly with equations or would they do both? We did see a mix of all of this! 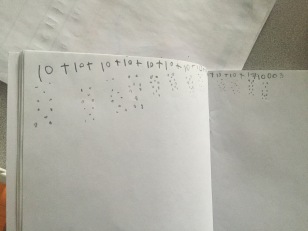 When Counting and Number of Things Counted Gets Jumbled…What To Do?

We had the groups share their first set (which were all in the 50s) and one group picked up on a counting strategy and way to organize that got a bit jumbled in the end.  This group put 10 on the first plate, 20 on the second, 30 on the next, etc. It was like counting by 10s but now there were not 10 on each plate. When I asked how many were on each plate, they were able to tell me that the number they recorded way was the number of beans on each plate and when I asked how many were there altogether, they said they didn’t know. This is where they ended:

So, where would you go from here with this group? Our feeling is to pull out the ten frames and put the beans from each plate on them because the students are really great at seeing and counting by 10s in this way. Would this be an interesting thing for the whole class to explore?

So many things to think about when counting! I love to think about how these ideas of counting and combining groups keep showing up in the work I am doing in all of the other grade levels! If we could really do this more and give students space to make sense of groups and how and why they work, wouldn’t it make so much of their future math work so much more accessible? If students really understood these foundational ideas, would we need to spend the time (and money) on intervention programs in later grades that are addressing these very same things?

Counting is Complex but we can structure ways to allow students to be successful in thinking about all of these ideas!

14 thoughts on “Counting is Complex”