Over the past few days I have been blogging about my 2nd grade planning, teaching and reflecting. Today was the follow up lesson…

This morning, I popped in the classroom to chat with Lauren, the classroom teacher, to catch her up on the lesson and chat for a bit about where we could go from here. I was so excited to hear she had read the post yesterday so we could pick up our conversation with the student work! We looked through the student work samples and struggled with how to structure the share…. should she just focus on one question or look at both? We decided to start with showing two student work examples  (and having the students explain how they solved it) from the same question that were different in how they represented and grouped their numbers to count, but ended with the same answer. After the class shared what things were the same and different about their way they solved it, we were planning on sending them off with a group who did the same question as they did and look for all the similarities and differences. In this, we were hoping students would start to notice how others grouped their numbers and move some of the students who are still drawing every picture and counting by one’s forward in their thinking.

I had to leave to go meet with another teacher, but after Lauren opened the lesson like we had planned and took her students to recess, (that is that weird split in their schedule that we usually hate but worked out well here) she came down to talk really quick. It seems that the class could not express similarities or differences beyond the “sameness” of their answers or representations they had drawn. And while, in the moment, I thought this was such a difference between 2nd and 5th graders. However, as I reflected later on, I recalled this same thing happening with my 5th graders last year!

We knew sending them off, as we had planned, would be ending with the same level of conversation, so we started brainstorming! How could we get them to look at HOW the strategies varied in process and not just look at the numbers and same answer? It is such a difficult thing to relate to the thinking of others, and it probably doesn’t help that the work and drawings were all over the place! Excuse the sloppy mess, but we decided to take strategies we had seen in the students work and frame it as work that Lauren and I had done in solving the problem and ask them to connect those! Then we added in a third teacher’s thinking from across the hall. You can vaguely see the pink counting by ones, the next by 2’s and then 4’s and 2’s, hoping students would think about how the numbers formed different-sized groups.  I took a pic of this, texted it to Lauren so she could have it back in her room and she had to run to pick them up from recess!

After my afternoon meeting, I popped back in to see what happened! She said they did so amazing seeing the similarities and differences when it was written out like we had done. For the first time we were asking them to do this work while looking at student work, I probably should have thought about how to better structure the “look” of the work.

Lauren said after the share she asked them to find the number of eyes in the 7 people, 2 dog problem thinking about what they had just shared. i just got to catch a few of their work samples, but it was already so amazing to see the movement from drawing everything to different groupings. This is where I wonder if students just need to have the permission to now “show their work” in ways that are not pictures? I am not sure but something I am thinking about. Here were a few samples of the new problem, I can’t wait to chat with Lauren about it more tomorrow! 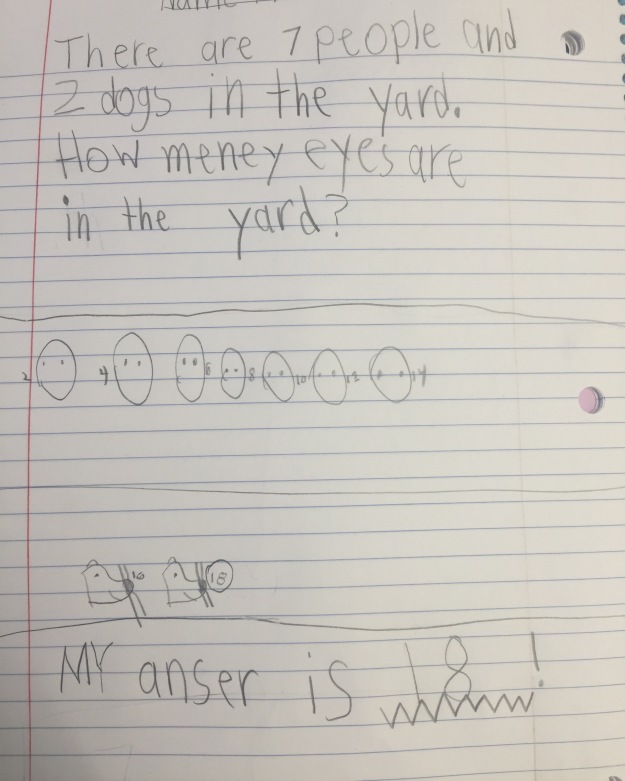 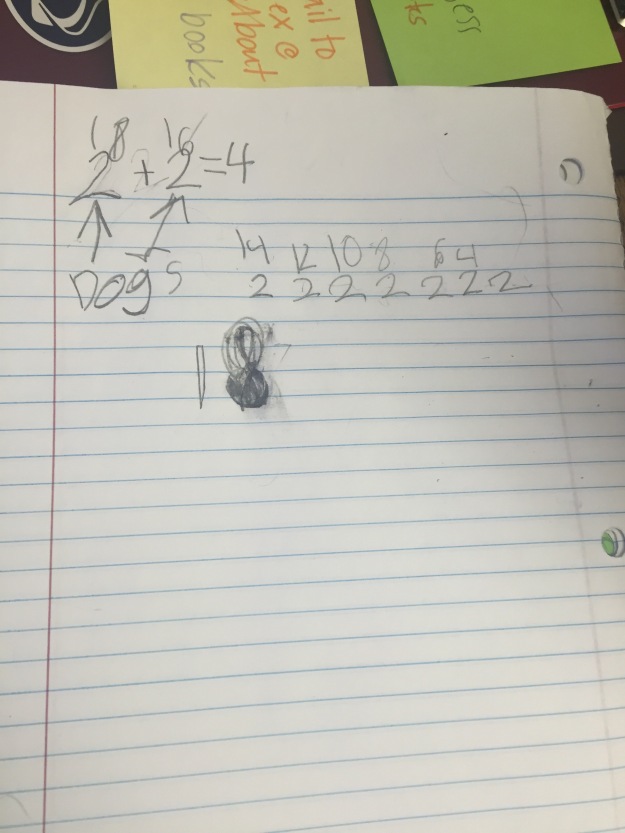