I planned today’s number talk to draw out a variety of strategies for students to reflect on as they worked through their decimal work today. I used this series of problems:

After a variety of strategies such as partial products, area model, double/half, triple/third, friendly numbers, and adjusting a factor and product I paused when I posed the final problem and asked them to estimate. Thumbs went up right away and I go predominately two answers, 800 (from 40 x 20)  and 720 (from 4 x 18 x 10). We discussed if it was going to be more or less than the actual answer and then we finished with a student subtracting 18 from 720 and arriving at 702.

While they were still on the carpet, I told them to be thinking of all of these strategies as they were going through their work today because we would be reflecting on them later. I posed the following problem and asked them to think about an equation and answer, “Bob is running 7 miles each day for two days, how many miles did he run.” I got 7 x 2 = 14 and then 2 x 7 = 14 because “it is two groups of 7 miles.” It was nice when a student said the commutative property makes that not matter for the answer. So I followed with, “What would it look like if he ran 0.7 mile each day? More or less than 14?” They said less because it is much smaller and we wrote 2 x 0.7 = 1.4.

They went back to their tables and I asked them to think about how we could represent these two equations on a number line. My thought was that it would give them a visual of the size (magnitude) of the jump and help in determining reasonableness. Eh, mistake on my part…I forced that number line on them and, while it was fairly easy for most, some really struggled. The upside was, it was a great formative assessment for me to see how students approach number lines (many like putting the 1/2 in the middle, yet had 14 on the end and were confused). We used number lines a lot in our fraction unit and definitely went past a whole on them, however I guess I did not really make that connection to fraction multiplication on a number line. Mental note for future work:)

After we had our number lines up on board and talked about determining reasonableness based on the factors. I posed this, “Let’s say Bob ran 2.8 miles a day for 8 days. What would be a reasonable estimate for his total miles.” They talked at tables, came back with 24, 20-24, and 17. We talked about the actual being more or less than each estimate.
Fabulous, now I want you to show how you could find the actual answer as many ways as you can.” 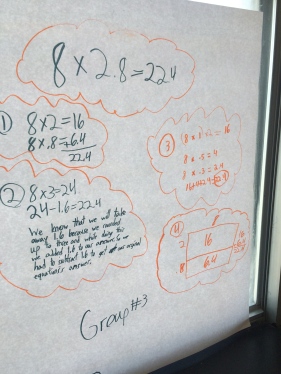 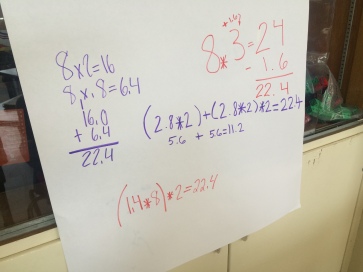 They went around to the different tables and talked about which strategies they had that were the same, one they maybe had not thought about and then which one they connected most with. After they finished walking around, I had them reflect on any of those questions in their journals… 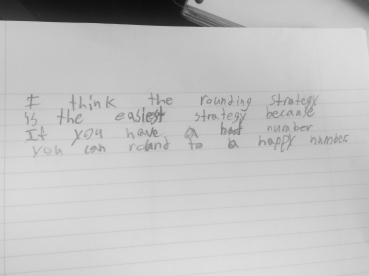 Aww….”a bad number you can round to a happy number.” 🙂

I love this student picked this strategy up from another group!

Can you tell they did not take to that number line at all? Not one number line. I also anticipated some fraction work, but they were really working with the decimal in connecting with whole number multiplication. It was a really fun day of math!