Each January, I like to ask the students to do a reflection on the first half of the year…things they liked, didn’t like, things they still want to learn, questions they have, etc…

Some students gave me a list of things they have learned by topic, others suggested that their seat be moved because they think they would work much better with their best friends, while some offered the suggestion of doing a “math project” that they work on over the course of a month or two (like their science fair project). I do like this last idea and looking into some type of ideas for this:)

I could really post all of them, because I just think my students are the coolest, most honest people I know, but for the sake of time, I chose two to reflect on tonight because I think it says a lot about what I hope students leave my class thinking about each year….

This is exactly why I started the Class Claim wall! I SO love that this student enjoys proving why things work, and even better that she started the sentence with the word “Actually,” like it was not expected! I also think it is so awesome that she said multiplied fractions before she even realized she was multiplying fractions! It makes me feel so good about all of the planning and work for the cornbread task which launched this unit. 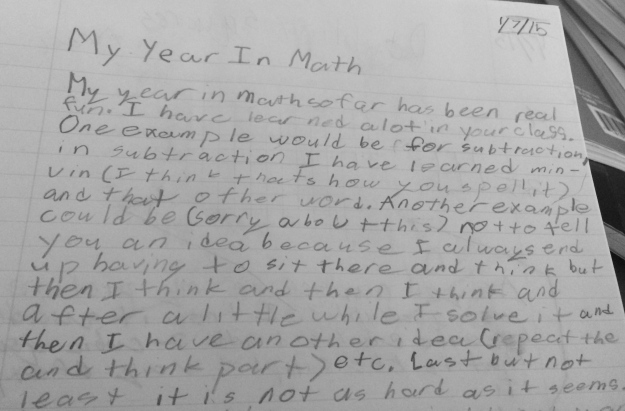 This one just made me chuckle at the subtrahend and minuend talk. That came out of a number talk one day when they were calling them the “one you’re taking away from” and the “one you are taking away” and wanted an easier, less wordy way to say it (don’t know if those words are, but stuck for this student). It did make me reflect on my work with Virginia Bastable this summer when she said (I am putting quotation marks, but this is not verbatim),  “Vocabulary should be a gift for the students in their explanations, developed out of need.”

The second part was just too funny and completely what I do to these poor kiddos all of the time! He has learned that when he has a finding or “idea,” I don’t just give him an answer, but instead send him back to think about it and see if they can figure out why that is happening. Then with another idea, the same process ensues…but at least, “it is not as hard as it seems.”

This is exactly what I want, curious students who work to explore their ideas and strategies and learn the processes of “doing math” without knowing there are procedures in place to do exactly what they are doing. I want them to see the “hard” math work they do as fun and an invaluable part of their learning.

They would probably be very surprised to find out that they make me do all of these same things before, during and after each lesson….

1 thought on “Math Class Through My Students’ Eyes…”