Two days ago, I planned this kindergarten lesson with Nicole and we taught it today! It was so much fun and I just have to say, I have such an admiration for Kindergarten teachers..that hour was tiring!

The Number Talk was a sequence of two dot images, both showing 7. It always amazes me to see the students counting, explaining their counting and writing equations so beautifully this early. In both images we heard counting by ones, counting by “2’s and 1 more,” and saw students count by ones and twos in different orders, solidifying the concept that the order in which we count does not change the total dots in the image. There was such a wonderful culture in place where students were open to agree, disagree, share answers (right or wrong) and all of this was shown to be valued by Nicole.

Next, came our number line adventure. Nicole had strips of painters tape around the room and sent each group of 4 to their assigned tape. As Nicole handed every group the first card, we (Jenn Leach, another Kindergarten teacher, Nicole, and I) walked around to ask students why they placed the card where they did. In keeping with the plan, the number order and observations were like this:

Before we gave them 5, where we really wanted to see how they dealt with the half, Jen, Nicole and I convened quickly to figure out how we were going to see that. We thought the ten at the end would be much easier to see their thinking about 1/2 so we decided to tell the students that 10 was going to be their biggest number to see if that changed their line. We got a couple, “Ohs” and slides of the 10 and 9 to the very right end.

Because we were running long on this part, we gave them the rest of the cards to place, finalize and tape down. This is what a few of them looked like (the others were all like the third pic):

The above group worked from the right. 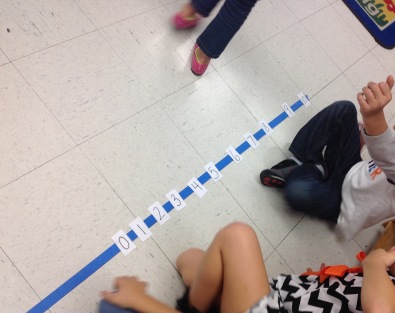 Loved the extra space before the 0 here!

This was by far the most popular line!

Then we had students walk around to other lines and talk about similarities and differences to their line. It was great to see the group who started on the right notice that the other groups started on, “that end” while the spacing was a huge topic of conversation. One little girl, whose group had placed all of the cards touching, said she knew why they spaced them out….”They took a breath. Like one, take a breath, two, take a breath, three, take a breath…” I had never thought about how the visual could impact the way we think about timing in our counting! The closer they are the quicker we count, the more spread out, the slower we count. Loved it!

We regrouped on the carpet and talked briefly about what they noticed….

All really important ideas! Next we went to our big clothesline to play around. Nicole placed the zero all the way to the left and I placed the ten all of the way to the right and said, for this part, we are going to say the zero and ten cannot move. Each pair of students (each from a different original group) got a card to talk about for a minute and then we called them up in the same order as the individual activity to place the cards. It started off all shoved to the left until one little girl went to place her number and started spacing them all out so it “looked better in her brain.” We asked the others what they thought about that. Some said, “it looks right” (says a lot about how equal intervals are visually appealing and seem instinctual for some) while others said they need to all be “at that end” (attached to the zero). We never reinforced one was better than the others but more that there are many ways we could think about this. I have video, but here is a pic of a piece of the final line…

Then, because we are just so curious to hear about connections they make, Nicole asked if they saw anything the same about the ten frames they have been using in class and the number line. A few students said both had ten and one little girl said it was like 5 and 5. Then, it was pretty awesome…she went up to show it was 5 and 5 and started counting at the zero card, so zero was 1, the one card was 2 and so on so needless to say when she ended her second 5 she was at 9. She said, huh? Loved it! Another student raised her hand and said it was because she counted too many, she started at zero and there is no zero on a ten frame.

it was SOOO much fun and I feel so lucky to get to see and hear all of this amazing math conversations across these K-5 classrooms.

The harder part, or at least what I am grappling with right now, is where to go from here. When it is a lesson within Investigations, I find it quite easy to pick up and move on but since this one is something we did outside of the curriculum, it requires a different plan. I am not quite sure where to go with this, but I have a couple thoughts (and would love others)…

So much to think about and I don’t know if any of these ideas are right or wrong or even age appropriate, but I am loving learning this stuff!! I am just so thankful to have such unbelievable colleagues who love to play around with these ideas with me!