The other day I did this fraction clothesline activity with a 5th grade class and today I had the chance to do it again with another 5th grade teacher, Leigh. It is always so nice to get to have a do-over after having time to reflect and think more about what the students thought about both during and after the activity.

I really thought the conversation was great during the clothesline activity, but it took too long the first time. We noticed that some students began to disengage. To try and improve upon that, Leigh and I decided to give only one card to every pair of students instead of each student having one. However, due to us wanting to keep a few important cards we wanted to hear them talk about, some pairs had two.

I also did not like my placement of 0 being at the very end of the left (when looking at it) end of the string. I moved it out some and talked about the set of numbers that falls on either side of the 0. I felt much better about that this time around!

In the planning of the first clothesline activity, we took fractions from the work the students had been doing with percents and decided on putting 100% in there, completely thinking it would be at 4/4. As the student placed it, however, I started realizing that I never thought about the difference of 100% in terms of the area representations the students had been using versus 100% when talking about distance on a number line. But now, having time to reflect on the card, I thought it would make a great journal entry!

As we neared the end of the card placements, I handed the 100% card to a student and told her it was going to probably cause a lot of discussion but just put it where she thought it went. She said she got it, walked up there and placed it on top of the 2 (the highest number on the line). There were some agree signals going on and some other hands that shot right up to disagree. We talked about it a bit and then we asked them to journal their ending thoughts so we could move on with the rest of the lesson about different sized wholes.

Some thought it was at 4/4, but because of the conversation became a bit unclear… 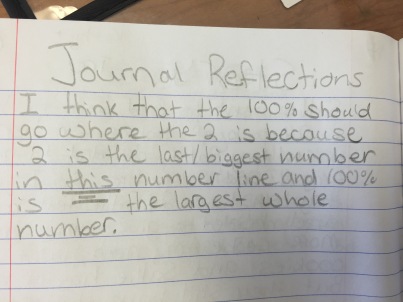 Some related it to different contexts with different wholes…

And one student said it can be anywhere with beautiful adjustments as it moves…. 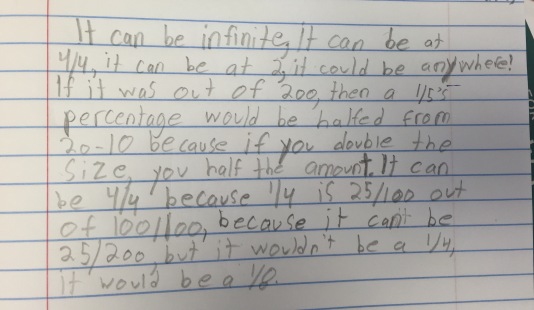 What a great day revisiting my planning mistake!

4 thoughts on “How Planning Mistakes Can Lead To Great Student Thinking….”