Over the past couple of days, with my homeroom, I have tried a few strings of numbers to bring out the different ideas that are important when thinking about growth patterns and finding any term in a sequence, Here and here. Both days brought out many great ideas, conversations, and disagreements, however I couldn’t help but feeling the ideas we talked about in two days, could have been achieved in one and felt a little more connected. I knew it was completely the way I posed the problems, so when my second class came in yesterday, after missing a couple days of math due to testing, I was excited to try and adjust my previous work.

Apologize for the messy board, but I still cannot seem to get a handle on that recording thing…

I started with having a student count by 6’s and wrote that in blue. I stopped them at 4 because I was asking about the 10th term and wanted to see if some would figure our 5th and double. I think that is an interesting thing to think about when the start is different so I wanted it up there. I asked 10th term? 60. Ways to get there? 6 x 10 and, unlike my prediction of doubling 30, one student said 24 x 2 because two group of 4 of them is 8 and then two more 6’s (12) is added to that to make 60. I asked 100th term? 600. 2,000th term? 12,000. I asked them how they were getting those without counting and I got “I did 6 times 100” “I did 6 x 2000” and then one student said you could do any number by multiplying it by 6. I asked how he wanted to write that and I wrote that in green. Another student, who has done Visual Patterns with me in our RTI group, said, “We can also write that as 6 times n = Answer.” I asked them to turn and talk to a neighbor if they thought that meant the same thing. We had all yeses and I had some student prove it. I did the same thing with 8’s and wrote that in orange. They started using “A” for “Answer.” 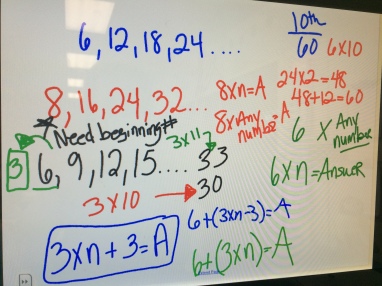 After that, I asked them to to count by 3’s starting with 6 and stopped them at 15… Asked for the 10th term and got, as expected, 30 and 33. Then the conversation took off with proofs and some really important ideas that was hoping would emerge. I love it when the class is practically divided in half on an answer, we had the 30’s and the 33’s. I asked a 30 to explain how he got the answer and he quickly said 3 x 10=30. I saw a lot of agreement, so I asked for a 33 to share their reasoning. A student said that we “need the beginning number, three, to find out where the tenth one is. 3 x 10 is 30 but then you started three ahead of that so you add 3 to 30.” I wrote that down on the board.

A student then said something that made me have a realization, “It shouldn’t change because you are still doing 10 jumps of 3, so it HAS to be 30. 33 is 3 x 11.” In my last class I had a student who kept insisting that the 10th term remain the same no matter where we started and I could not figure out what they were trying to articulate. NOW, I understand. 30 will always be the distance between wherever we start in the sequence and the 10th term, but not the tenth from the true beginning. AH HA!

So, the beginning number was suddenly becoming very important and articulating “10th term from where” was having students agreeing that the 10th term starting from the 6 was going to be 33 but when thinking about a rule for the pattern we needed the true beginning. We were just about to head back to our desks to continue our work when a student (different than the one who had originally said it) said that we could write this one “3 x n + 3 = A” because you have to “add the three you are missing from the beginning to get the answer.” I had them turn, talk and try a few terms out and see what they thought. It was all wrapping up nicely (I was excited about it) when another student said, “You could also write 6 + (3 x n) since you are starting at 6” ….oh goodness, they just don’t ever let it end and I love it:) A disagreement arose that it would have to be “6 + (3 x n -3) because of that extra jump of 3 to start at 6.”

I always hate to say that time got the best of me, but I had missed this group for 2 days of math and I saw this conversation going lonnnnng so I had them write those ideas down in their journal to kick off our class on Monday!

I love when I have the chance to refine ideas that don’t go exactly as I had hoped they would, especially when I know it was completely how I posed the problem or asked the question. After a couple days of talks not connecting as I hoped they would, third time was a charm!