In the next round of 1st grade videos for my Teaching Channel Math Routines series, I am so excited to release a video of a Choral Count. When I taught 5th grade, I used Choral Counts a lot with decimals and fractions, so using them in the earlier grades was such an interesting parallel to that work.

I don’t want give away what you will see in the video, but Heidi’s recent post about trusting patterns when multiplying by 10s made me think about two particular student journal entries after the count.

In this count, students counted by 10s starting at 4 as I recorded their count and I stopped them at 154. They discussed patterns they saw in the count and afterwards, I asked them to journal about any new or extended patterns they think may happen if we continued counting. One thing I stress in their journal writing is the fact that it doesn’t have to always be written in words, we can explain mathematics with numbers as well. These two students didn’t include any description of what they noticed, but from their recording, I can assume some things about what they saw.

Through Heidi’s lens of trusting patterns, I watched this student record her extended count. Instead of writing every number in its entirety, this student wrote out all of the tens and then went back to add all of the 4s on. I asked her how she could show the pattern she noticed and she quickly went back to underline all of the tens. She trusted the pattern that the tens would continue going up by 1 and the ones place would stay the same throughout the rest of the count since we were counting by 10s. The pattern she noticed and trusted worked, would continue to work if she kept counting, and is something teachers could build on by counting by different multiple of tens.

Now, this student below invented another pattern that doesn’t keep the count in tact but brings up an interesting connection to the work above. Instead of looking at the tens going up by 1 and ones place staying the same, this student added 100s going down each column. In his work, the tens and ones stayed the same while the 100’s increased by 1 with each jump down. 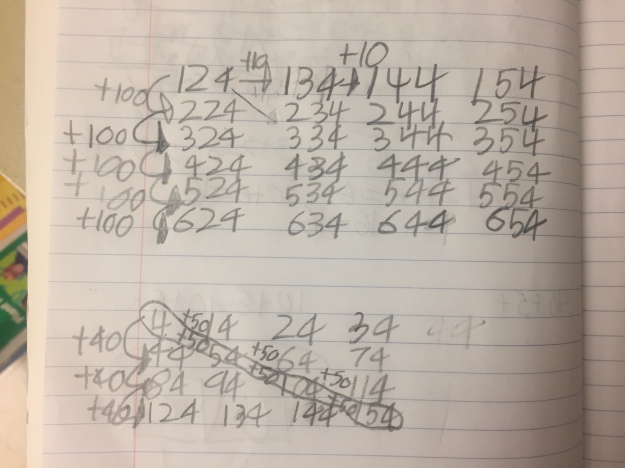 The more I looked at these, I thought about how to support students in later grades who are unsure whether to trust a pattern or even why patterns work in the first place. For example, and not that counting by 7’s would be the way to go, but for Heidi’s problem of 2,000 x 7, I wonder how a choral count could support students who were struggling to explain multiplying by 10s. The student in Heidi’s example obviously has a grasp of the idea, but what about those who don’t?

Let’s see what we notice here:

Could students pull out where the multiples of 10 would show up if we kept counting?

Could they translate that pattern to equations?

Could they apply that same understanding to counting by another number but keeping the same structure of 5 in each row that is shown here?