Next year, we are restructuring our RTI block to be a time when students are working in small groups in their classrooms. This is a really exciting change from our previous model in which students were pulled from their classroom for intervention. This change will shift our Learning Lab focus to planning small group activities, however the first, REALLY important, piece we need to focus on is how small groups work in the classroom. I think the K-1 teachers have a much better sense of how centers work within the classroom, although we still want to move from the current centers to more strategically planned small groups. So, with only a week and a half left of school, Erin and I are playing around with some ideas in the classrooms as a part of our planning! Fun!

Erin and I planned for a 4th grade class today where we were going to test out a small group scenario. We started in a way I imagine everyone could kick off the year next year, involving students in the process. We asked them what they needed in order to learn in small groups. Below are all of their great responses, most of which were accompanied by an example of something they had experienced during small group work. 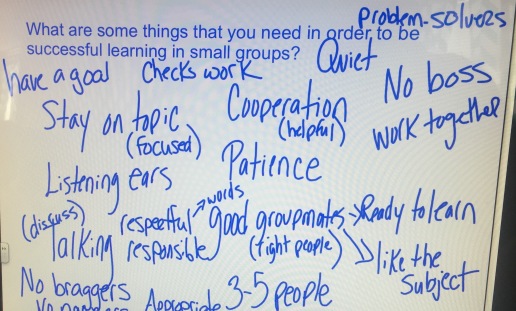 I launched the small group task by reading One Hundred Hungry Ants aloud, pausing occasionally to ask for predictions. After the reading, I didn’t preview the task, but instead sent them off to work in their small groups. This was for two reasons: to see if the wording of the task was clear enough for students to follow independently and to see how they worked as a small group. We choose to give everyone the same task today to see how it went but we are trying different small group tasks tomorrow.

Each group had a journal, storyboard, and this task card:

They worked for about half an hour and had some great conversations. I especially liked the conversation sparked by the third question because number choice is something I find so interesting. They also had to do some serious negotiating to decide which number they would do as a group since everyone had different reasons. In one group a student wanted to pick 2 because they would “get there faster,” another wanted 75 because “it could make a lot of combinations, but be less than 100 so they could still make it in time.” In another group, a student was saying he didn’t want any prime numbers because you could only do two lines with them.

This one was great because they changed the storyline from finding a picnic to getting to Dairy Queen, but when they get there they had forgotten their money so they still got no food. Different story, same ending.

This one was so interesting because, unlike the book, they used the commutative property, seeing the arrangements as different situations, which the book did not do:

This group saw a lot of doubling going on in their arrangements when they chose 50 instead of the 100 in the book: 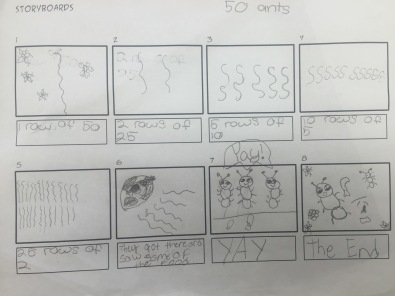 We came back together and talked about the patterns they saw. 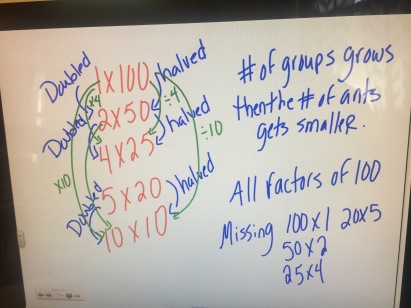 While the math conversation was interesting and I can definitely see some great generalizations stemming from this work, tonight I am thinking more about the questions I am left with about small group work…

More to come tomorrow when we tackle these tasks: