Last week, the 4th grade team and I planned during our Learning Lab for their first division lesson in Unit 3 of Investigations. The book opened with the following problem:

As we talked during the lab, one of the main concerns expressed by the teachers was student comprehension of the context. This was not necessarily in reference to this specific problem, but story problems in general. This is not surprising and definitely something, I would say, we as teachers face quite often. This is why I love Notice/Wonders and offered that as an idea to take that “number grabbing and compute” feel out of the problem.

As we read the problem aloud, we anticipated how students may respond in two scenarios:

We opted for the second one with the thought that we could ask them to anticipate what a question may be for this problem and what information they would need from us. It felt like a bit of a mash up of noticing/ wondering and a 3 act task.

I really want to get to the student thinking here so I will not go into the details of the N/W, but here is what we ended our conversation with…

After this, we gave them the original problem and sent them off too work on the problem. After 5 minutes of individual time, they came together as small groups to share their work and create a poster with all of their strategies.

*We did debate that last sentence for a bit. We didn’t know whether the rows being the same size would arise and/or if it would send the problem in a different direction. Another 4th grade teacher tried it without that sentence in a different class period and it didn’t seem to change the focus of the work so I wonder if student make that assumption? Then I wondered if we give too many problems that are arrays and maybe don’t play around more with the “extra” pieces that could be added on?

Show Your Work vs Show Your Thinking

After the lesson, I wasn’t surprised by the students’ strategies as much as I was left questioning how we posed the prompt for students to show their strategies. The teacher asked them to solve the problem and show their work. This piece is not something we talked about at all in our planning because it is what we all say, but does that make a difference in how students show their solution path? Do we ever make explicit the way we can show our thinking clearly and explicitly either pictorially or numerically?

As I walked around, I would have thought at first glance that over 50% of the students were “passing out the apples” on their paper to arrive at 14, however after asking them to explain their thinking to me, I would have completely assumed wrong.

For example, this student’s work (on the left) was just the rows and dots underneath it when I walked by. I assumed he had “passed out” 56 apples to each of the 4 rows, however when I asked him to explain his thinking to me, it was so much more than that. He said he “gave each row 10 because that would be 40 and then there were 16 left, so half of that is 8 and half of that is 4, so each row got 4 more. I asked him if we could take what he did to write an equation for it? He said 10+10+10+10 and then wrote 10×4=40 and added the 4×4=16 underneath. I asked where the 56 apples appeared in his work and where the apples in each row were. So, the thinking he explained made his understandings so much more clear than the work he had shown. I wondered if he really needed to show all of that work or he just thought he did for the teacher to see “work”? Next, I partnered him with his neighbor (work on the right) to talk about how his thinking could be show within her multiple tower.

When I walked up to this student, she had everything on her paper but the equations on the right. I asked her to explain her thinking and she explained that she divided up the 56 into 4 rows. By the way it looked to me, her x’s were written going down each column which did not indicate to me that she has passed them out so I asked her if she solved using those x’s and she quickly responded, “No, I just got bored…see all of my decorations!” I pressed her a bit more to explain how she got the 14 and she said she knew 8 x 7 = 56 and she used that but was having trouble explaining it. I asked her if she thought it may help her remember if she wrote down the 8×7=56 on her paper and quickly after she wrote it she explained she had halved the 8 and doubled the four. Again, he work would not have matched her thinking.

Going in the other direction, this student had the 56 circles with 28 labeled at the top, 14 labeled on the right and the equations written at the bottom when I walked up. I assumed she had split the 56 in half and then in half again, using what she knew from her equations. However when I asked her to explain her thinking, I found she had drawn the circles one at a time in rows of 4. She said she split it into two groups, counted the 28 on one side and then counted how many were in one column. This was interesting to me and I am kicking myself about not asking more about the 4 rows because she counted by rows of 4 but then found her 4 rows of apples actually in the 4 columns. In this case I would have assumed things that didn’t happen from her work that really didn’t match what she was thinking. 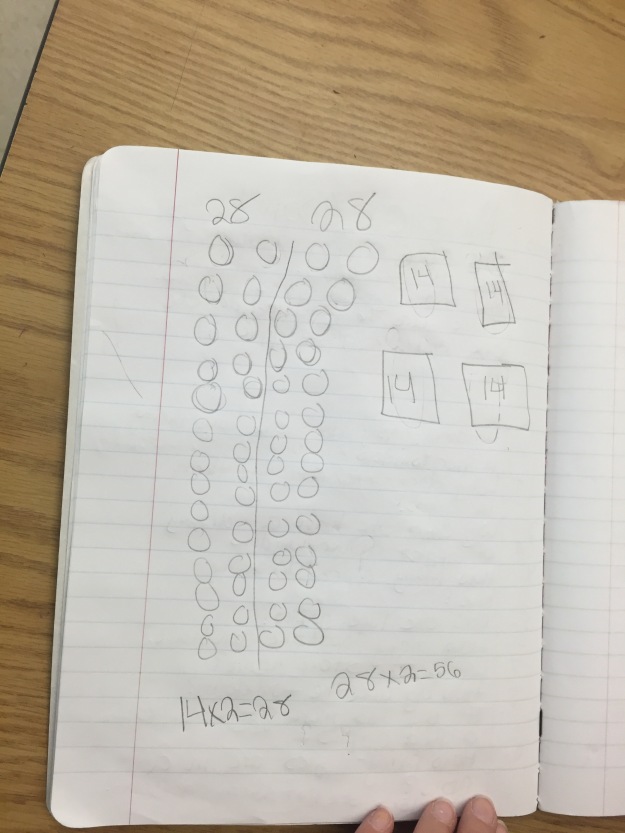 Here are some other great examples of student thinking:

Show your work versus show your thinking…do we say both? do we make explicit what we mean by them? I am not sure, but what I do know is that we never learn more about student thinking than we do when we talk to students about their work!

12 thoughts on “Show Your Work vs Show Your Thinking; 4th Grade Division”