As teachers, we don’t typically like to admit when we don’t know something in front of our peers and especially in front of our students. Luckily for us, if we can stall long enough to get to our phone, Google has made it quite handy in making those moments extremely short-lived. The unique opportunity of being a teacher however, is using those moments to reflect on how or why you never learned that particular idea, and in this instance, what the answer really is!

After working through this choral count: https://mathmindsblog.wordpress.com/2015/04/20/choral-counting-decimals/ and  https://mathmindsblog.wordpress.com/2015/04/22/investigating-patterns/ my students have come to some really interesting noticings and looked deeply into some proofs of why those patterns are happening each time. Most of this has been focused on properties of multiplication and division and thinking a lot about relationships between factors and multiples. One group of students, however have begun to really play around with the “switching” of the digits in the multiples of .3 (and 3’s since they noticed their similarities) and will rest until they understand why. 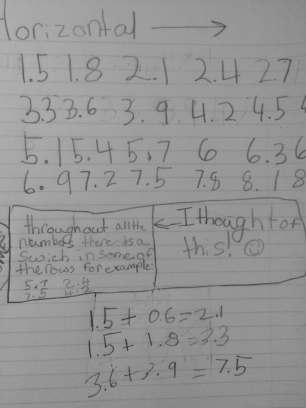 I see them working so hard because they WANT to understand. I will completely admit, the closest thing I could come up with is the divisibility rule I “was taught” for 3’s. I wasn’t going to tell them this “rule” because I realized, in that moment, they uncovered something I could not explain to them at all because I never truly learned it. So instead, I sat with them, and we thought through it together. We played around with partial quotients and noticed we could always make dividends that were divisible by 3 any way that we moved the digits around. But, why? I had one student finally just ask…

“Mrs. Gray, do some things just work in math because they just do?“

I quickly said no, but that was exactly what my problem was, I never truly learned why numbers were divisible by 3. I thought it worked because it just did, why would my teacher tell me otherwise? I completely remember copying down all of the divisibility rules, memorizing them and acing the test I took on it. It seemed like a really cool trick that just worked because it did. Today, I know I could easily Google it, find a video with an explanation, but I want to think about it more. I want to play around with the numbers and understand why this works with 3’s, so I can really learn it this time around. I want to be like my students…struggle, persevere and learn.

It is moments like this that make me feel so amazing about the thinking and learning that happens in my classroom and the classrooms of so many of the wonderful colleagues I have in person and on Twitter. We want our students to truly understand the math, not simply just be able to do the math. This is especially true for me in this moment. I could easily have told the class that they can switch the order because the sum of the digits will still be divisible by 3 and that is the rule for determining a multiple of 3, it just works. But I don’t want my students ever thinking math is a series of things that “just work because they do” or something we learn in school and never revisit to think deeper about it. I want them to see us all as learners, which is why I continue to play around with this 3 thing…I will get it:)

6 thoughts on “When My Students Uncover Something I Never Learned….”