Last year, I used this activity with my 5th grade students and blogged about it here. This year, I used the same activity, however tried it a bit earlier in the unit than last. Based on our Talking Point activity before the unit began, I found the students had very good understandings that would emerge naturally in the Always, Sometimes, Never activity. I wanted to see how using the activity before a lot of our classification work would affect the outcome, if it would differ from last year’s.

This year, we had played “Guess My Rule” the day before in which students use attributes to choose two quadrilateral cards that fit their rule and one quadrilateral card that does not, while their partner tries to guess the rule. It is great for thinking about classification by sides or angles and vocabulary building. At the end of class, we did a few rounds together, and chatted about some vocabulary that was helpful and talked about our classification by sides, angles, or both.

Being the day before Thanksgiving, you never know how it was going to go, but they were so engaged in the work. Here is a copy of the cards that I used:

I gave them time to individually read them and underline any words or wording in which they needed clarification. Although I was surprised that some students asked about words we had discussed in prior class periods, I was so much more happy they felt safe enough to ask for clarification. This is a prime example of not making assumptions in what our students know just because we have talked about it before in class.

They cut them out and went to work. As expected, they would have a brief conversation with their group and place them quickly into the appropriate column on their desk. I let them do that on my first round around the classroom and then as I heard some debates starting, I suggested that maybe using their journals to show their proofs may help their argument.  For those who were quickly done, I said, “If it falls in the Sometimes category, you should be able to show when it does happen and when it doesn’t happen, right?” I also pointed out the reasoning for Always never being able to be disproved and the opposite for Never. This had them really go back and take a deeper look at the cards and got their conversations going.

Of course, we did not get to come back together as a group and come to consensus but here were the table card arrangements as the class ended: 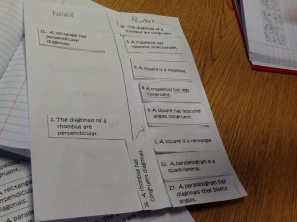 I had them do an individual reflection on which card they are still really struggling with and these responses are going to help in framing how I proceed from here on Monday after vacation: 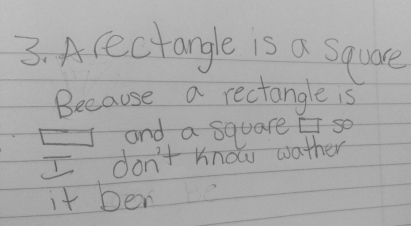 It is really interesting that for some students the orientation of the shape makes the biggest difference, others strugglw with the vocabulary, and, like last year, that rhombus one is blowing their minds. It is so interesting to me that a student can apply shape attributes to make a conclusion that a rhombus is a rhombus, but then to take that reasoning and apply it to another shape, is extremely difficult. This led to a very interesting conversation between a colleague (who was in observing) and myself about students knowing definitions versus descriptions….still wrapping my own head around that one…will probably be a blog post coming soon:)

With all of this information from the students, on Monday, I plan on putting them in groups based on the related cards they were left grappling with. I think rearranging the groups will lead to interesting conversations and more detailed proofs. Each table will get three cards to create an argument for the placement of that card. They will present their argument to the class and we will try to come to consensus as a class. Last year we did this share as a whole class, and I didn’t feel like it “wrapped up” and things were left hanging out there that needed to be a bit more solidified in future classification work, so hopefully this will be change that.