Last week, I did an investigation on identifying fraction/decimal equivalents and interpreting fractions as division.  In previous years, I have to admit, I never fully appreciated this lesson. I could never get a grasp on how to not lose all of the great understandings students have about fractions and make it about division with the calculator. However after last week’s work, I have a new appreciation for the conversations it brought out in the classroom.

Throughout the year, we have worked with decimals, fractions and percents, so I feel my students are very comfortable moving between the three notations. They see the relationships between the decimal and percents for the /2s , /3s , /4s, /5s,  /6s , /8s, and /10s and know the percents for many (if not all) of those fractions because of our work on the 10×10 grid.

I opened this lesson with a fraction I was sure they knew the decimal for, 1/2. I asked them how they think we could use a calculator to find the decimal if we did not know it. They played around for a while and as I walked around many students could tell me they divided the numerator by the denominator. I asked if that same method worked for 1/4? As a class, they agreed it worked every time, so I asked why they thought that was so. Why are we getting a decimal? Many said with 1/2 we had “one whole divided into 2 pieces, so each piece has to be .5 so they both add to 1 whole.”  Another said we only get a whole number when “it is more on top then the bottom.”  I felt comfortable after a lot of talking from the class that they were seeing the fraction bar as division. So, we moved along to the division table. I had a student explain how a multiplication table works and then explained the numerator and denominator row and column in this decimal table. We looked at 1/2 and filled in the 0.5. I asked where else that decimal would show up in the table and they filled in the equivalents of 2/4, 4/8…etc. From there they worked with their partner to complete the table.

I teach two classes of math (thank goodness) so I can change up things that didn’t work as expected the first time. In the first class, I let them use their calculator from the start of the table. I realized as I walked around that students were completely losing their sense of fractions and it became a calculator exercise…exactly what I was afraid was going to happen. I saw students filling in by column and using the calculator in the tenths row! Big Fail on my part. I stopped all calculators, told them they had 5 minutes to work without the calculator to complete all of the decimals they could. The conversation took a dramatic turn for the better! They started to see that working in rows helped them see patterns and used their knowledge of equivalents to complete other cells and honestly moved along much faster! Needless to say, I started the next class without the calculator and the students liked the challenge of trying to reason about the empty cells without the calculator. Here is a sample of one of my student’s completed table: 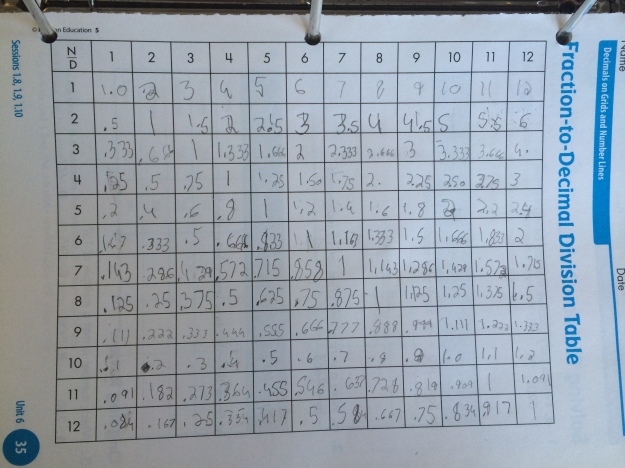 For homework, I asked the students to write at least five patterns they saw in the table, either as they were completing it or after reflecting back on it. Here are some journal entries: 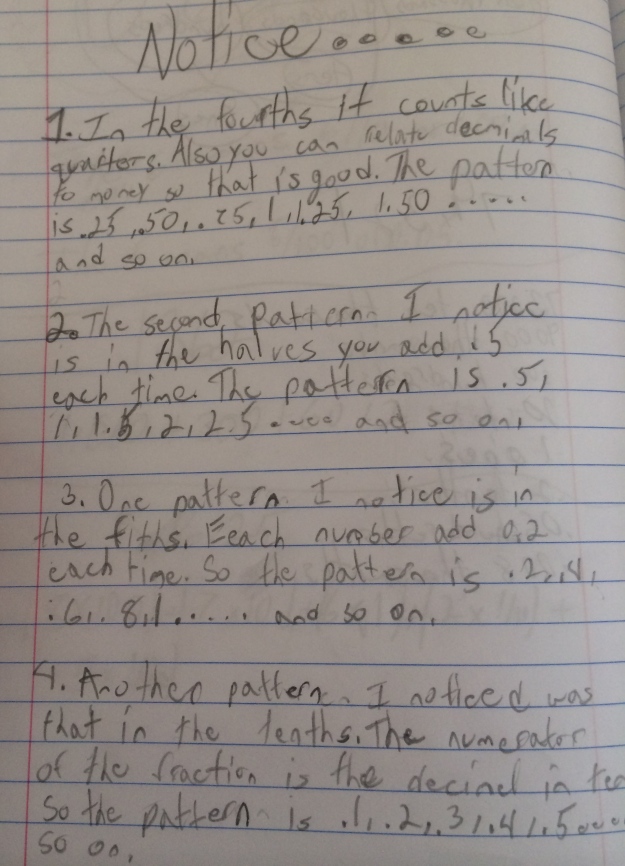 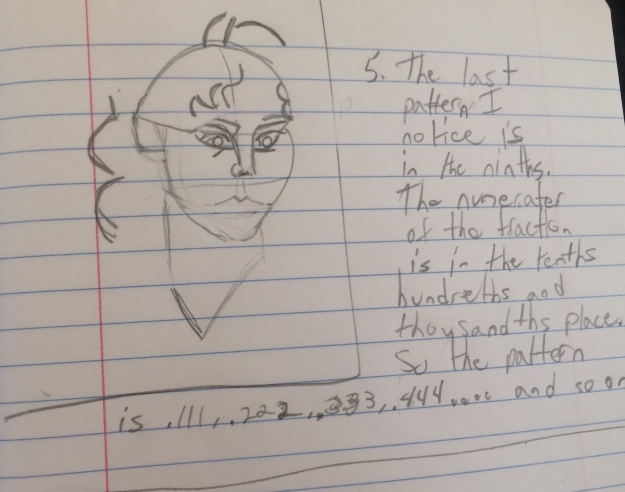 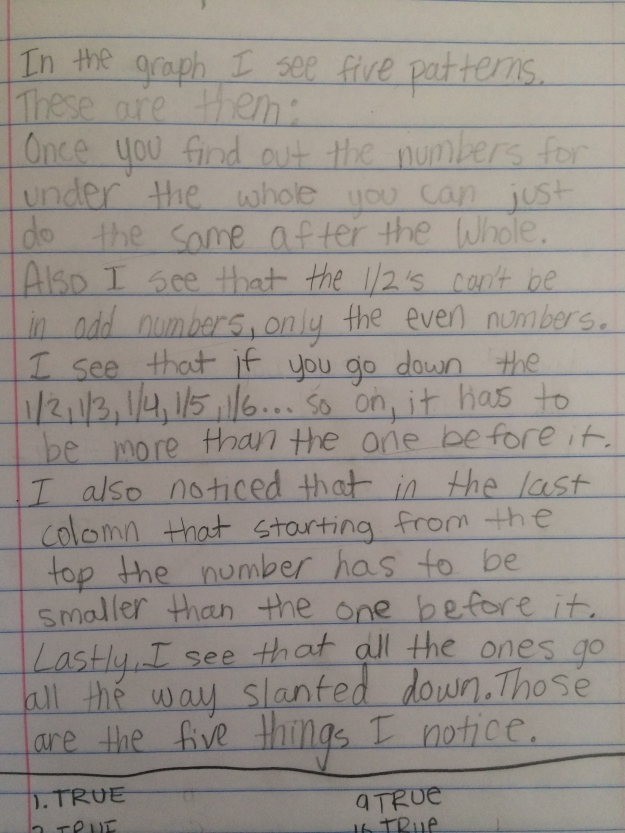 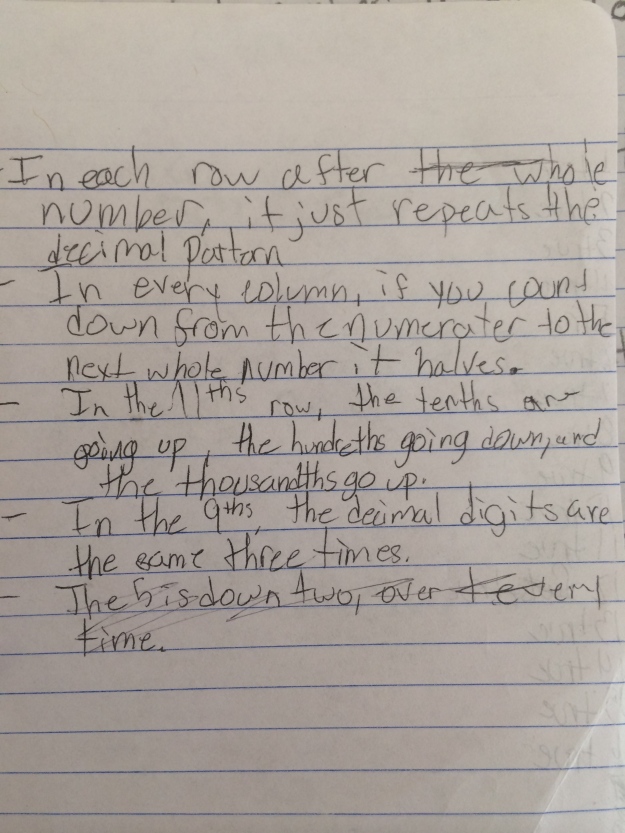 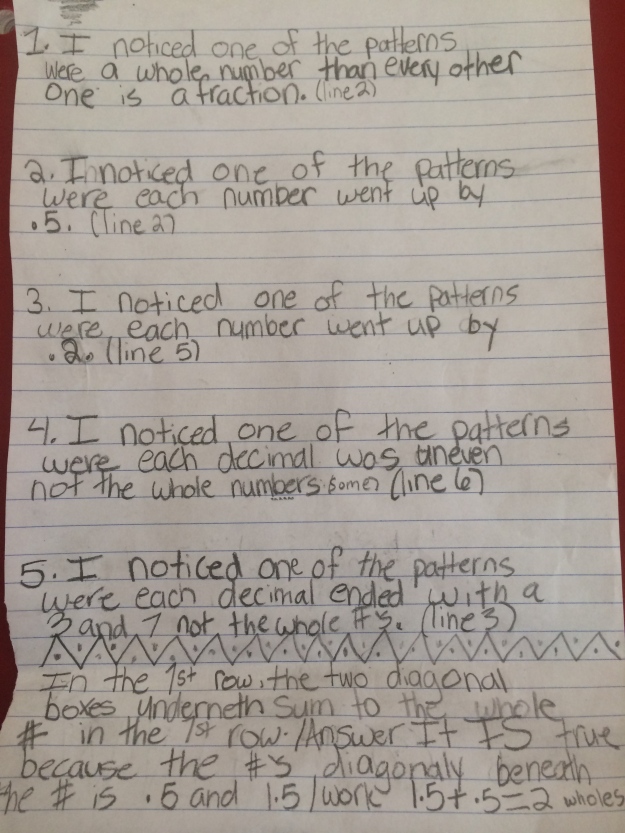 As a class, we came back together the next day and collected our noticings on the board:

We had some that we agreed on, some we disagreed with and others we had to reword to make it agreeable for everyone. I found in that class period the meaning of this lesson for me…it wasn’t so much about completing the table by using division, which was my previous aversion to this lesson, but instead about finding patterns and digging into why those patterns were happening.

I would love to go through each one and tell you about our discussions, however to be honest, I have so many other things I have to get done before class tomorrow! I hope to follow up with a future post on our decimal discussions.

However I do have one thought/question I am still grappling with that I would love some thoughts on..

One student noticed that the elevenths “goes up by multiples of 9 in the tenths and hundredths.” They clarified by writing the decimals (rounded to the thousandths) on the board for us: 0.091, 0.182, 0.273, 0.364, 0.455…etc. The class could see where the multiples of 9 were showing up. Then one student noticed that the tenths was going up by one, the hundredths was going down by one, and the thousandths up by one.

At that moment, this sounded like the multiples of 9, the ones place decreasing by one and the tens place increasing by one. Now with the whole numbers you are adding a ten and taking one away to add the 9, so I see that…and for the elevenths, you are getting one more piece then tenths, so are you adding a tenth and then taking a hundredth away? Is that for the same type of reasoning? Then the thousandths? I will be busy procrastinating other work to play around with this tonight 🙂 Any thoughts welcome!